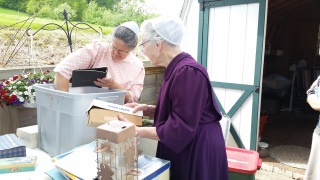 We have been having happy early summer days. We spent Memorial Day at Lewi’s with the Graber’s who could be there. Mom had an “activity” planned for us, so said our invitation.

It turned out to be a sorting through some of her storage to give it away to us or throw it away as suited us. 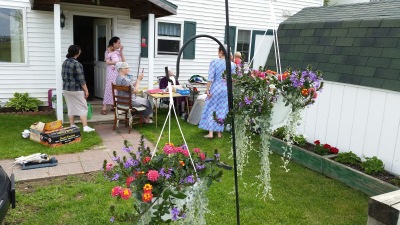 Mom enjoyed this, as you can see. Honestly, it took me a bit to get into it. But as we began to peruse carefully through boxes of brown and crinkly cards and letters; it was plain that the history in me had hit the jack pot.
Today I sneaked a better peek through “my” box. Imagine my excitement to find the letters Elv had written to his folks while he was in Red Lake before we were married. The letters I received from him at that time burned in a house fire after we were married. Obviously these are not quite the same… but still. 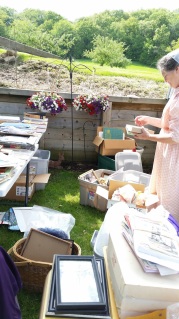 Mom has kept each and every card or letter she has ever received. She has boxes of them. I think Charlotte and I gathered up two of them.
We also found a lot of poetry and stories that either she wrote or had collected from others. Photos, framed art, drawing stuff, sewing, rag dolls, and many other treasures. And throw-aways, too.

We spread the contents of the boxes and bins out on tables in Mom’s little front lawn and dug in. 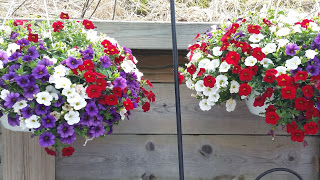 The guys played Stock Ticker, what else?, while we sorted. 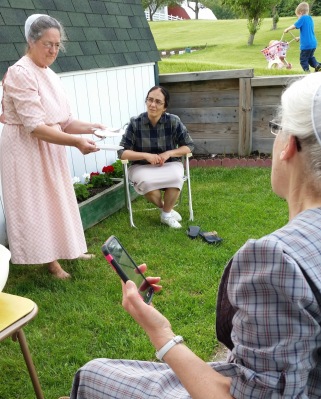 Three of my favorite sisters-in-law. These women make great friends to me, as well.
Never mind the grey heads and thickening waists on a day like today. On a day like today, we are young again. Not! We are old and happy that the babies are our grandchildren. Grandchildren to be carried and cosseted by our children and spoiled by us! Isn’t it fun?
As I write, Amy is carefully looking through The Box. Now she found letters that Mom wrote when the boys were little guys to her parents at home in Wisconsin. She drew outlines of the boys’ hands on her letters.

The view from the top of the Lewi’s property. The clouds were gathering up for a down pour. 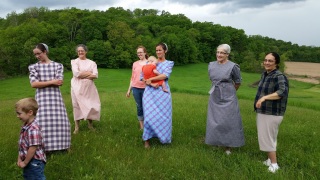 The apple trees are loaded this spring. 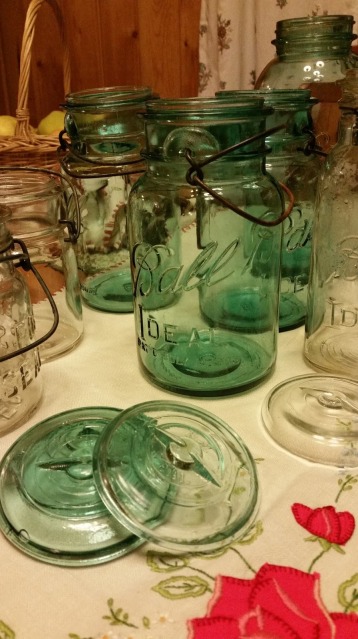 Among the treasures were blue jars and old silver plated table ware. I grabbed for the jars, I’ll confess, because Kristine wants them for her wedding.  And everyone graciously allowed me to play pig, only asking for one for themselves each after the wedding. I’ll try to be more generous than that.
We got home after ten that night, but I couldn’t wait. We washed them all up. Elv and I sat at the table and researched these old jars like two thieves over our loot.
Three of the spoons among the mishmash of silver ware were matching and monogrammed with a “G”. I’m treasuring these.

And one more thing. Elv’s lawn has now become a reality after much labor and three grass seed sowings. I think every sowing has finally germinated! And I am delighted. Let that suffice!