That’s what Elv said he wanted this year… a formal meal in the early afternoon.

So: Clark bought the biggest turkey out there not unlike Bob Crachit’s own, long ago described in the pages of A Christmas Carol by Dickens. He marinaded it in apple juice and other goodies, of which I have no clue, for a day or so.  Yesterday day morning at about 7 AM when most people were still lounging abed he called and ordered up a cherry wood fire built in the home-made, barrel smoker, pronto. Then he packed his family and the turkey up in the sleigh (Jeep), cracked the whip, and came over the river and through the woods to our house. The turkey came out of the brine and went into the barrel and got such a smoking you ever did see. It was the moist and yummy. 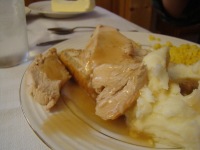 And Amy made pie. She dug out her journal and found Grandma Graber’s famous traditional Brown Sugar Pie recipe she has written there.  Brown Sugar Pie is a poor man’s custard pie that only the great-grandmother Graber knows how to make perfectly where there are no layers and nothing falls in and it miraculously “sets up”correctly…anyway, you get the picture. Our girls continue to try. Jenny and Amy each have actually “gotten” it once or so. She also made pumpkin pie and then spent a long time over playing with the top crust of an apple pie making flowers and stems and leaves. I love this sort of thing. Not doing it, watching it done, and admiring it, that is. And of course, it is all about actually being related to someone with this much creativity and talent. It’s like living in Better Homes and Gardens everyday, kinda. Only better, because it isn’t Pinterest, it’s really real where it actually matters. Does anybody know what I mean? Pinterest is a terrible waste of perfectly good  creativity if it stays there. Bring some of it home in actual work/time/material and then I’ll be impressed! Oops, off the subject. 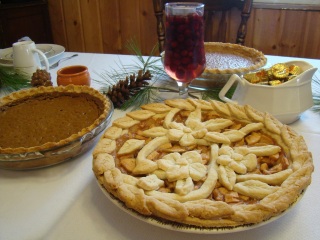 And I boiled the two lovely sweet potatoes I bought at Wal-mart, peeled them after they cooled and sliced them into wedges, long-ways and julienned them to perfection. The guys don’t eat this traditional dish. Just us girls.

And mashed potatoes, Mennostyle. (Creamed to a spotless white and smooth perfection with little a cream cheese and a lot of butter.) None of your lumpy, grey looking brown speckled mashed potatoes of Perkins or the like, for us, thank you.

And the pretty table. Frank used cranberries, goblets and tea lights adding loveliness to our table length centerpiece. We could; so we did. White cloth, china, good food. 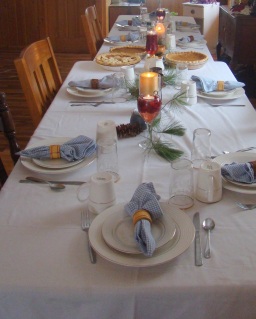 The most important element of Thanksgiving is us and our gratitude. The rest is a bad joke if we aren’t thankful and happy. The guys played games in the afternoon. Us girls took a walk through the snow leaving the babies with the men. And visits. Important stuff.

The day closed with done dishes, a tidy house, half eaten covered pies on the table, depleted candy dishes, and stoked fires. The winter temperatures outside dropped from 3 degrees to 1 degree Fahrenheit in just a few minutes as the lights were being blown out for the night.