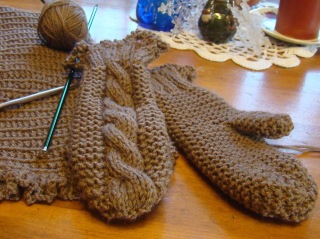 Francis decided to crochet a scarf and mitten set for herself.  She completed her scarf crocheting, but became bogged down with the mittens. Finally, she asked me to knit her mittens. I have been trying to knit again, just to see if I can. I can. So I knitted mittens for her.  She added the crocheted edging to both mittens and scarf. 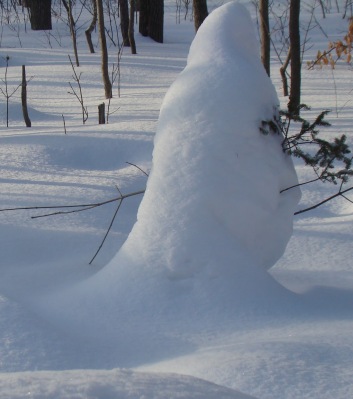 Gwen and Myle’s snowman has a new cloak of snow this morning. He looks like he is running away. But he will just have to stand there and wait for spring to release him.

How much snow is that? We haven’t had March yet, so we’ll get to measure again. 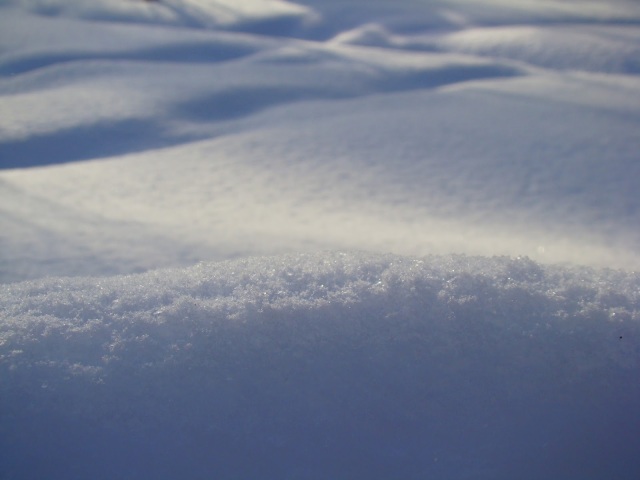 A little macro of the snow. I thought snow was white, but on a morning like this one, you have to wonder.

Nimrod earned his name by promptly ridding us of the resident rodent vermin. But he hates cold weather and tries to get in every time the door opens.

It’s Valentine’s Day today. Yesterday a big house on the lake burned to the ground while the firemen dragged hose through deep snow and hauled water with trucks and pumped water from the lake trying to put the fire out. Elv finally got off to work around noon. By afternoon when it rekindled, they tried to pump the lake into the basement so that the fire warden would be satisfied that the fire was actually out. The firemen were fagged by midnight when they finally were able to leave the fire house for the last time. Mr. Fire Warden can now bring in his detective dogs to see what caused the fire if they can still tell after the great deluge. Somehow, I don’t think my fireman is going to be enthused about anything but snoring in his recliner by the fire on this Valentine’s Day evening.

I noticed that by last evening all the glamor and glory to fire fighting had left the scene. The few men who stayed by till the end are the great firemen. It was hard, dirty, cold, slogging work with deep snow, clumsy hoses, spilled water, soot, smoke, and  an all encompassing weariness. I ask you, at exactly what point in the trudge last night were these guys free to give up and go home? As soon as they were tired of it? Maybe as soon as they started to feel like they’d breathed too much of that awful smoke. Why not decide when it rekindled that it somehow was not their problem anymore?

Thankful today for a faithful husband who takes good care of me and ours.

Made them stand outside in the cold for this one. Happiness!

Josh and Frank, please come back here 30 years from now and let me take another picture of you two and his roses. Won’t that be fun? May God bless you with many years of Happy Valentine’s Days.