We had a church gathering (farewell) for one of our young ladies who is leaving home for the first time on her first big adventure (teaching first and second graders in an out-of-state school). As is the custom we got together to play and pray and share food and a few gifts. It was a lovely time of fellowship.
We’re good at this sort of party and everyone has his contribution to make it a happy one: pretty table, nice finger food, wild flower bouquets, a gift basket for the cards, new games, guitars for singing around the campfire, firewood, camp chairs, and mosquito dope. 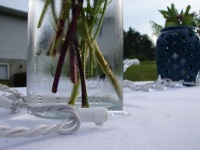 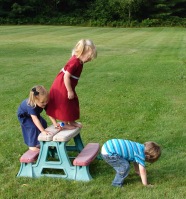 These two-year-olds were being so cute I couldn’t resist taking a few pictures. They were not posing and were far to busy with their own games and songs to notice anyway. Is there anything more precious? 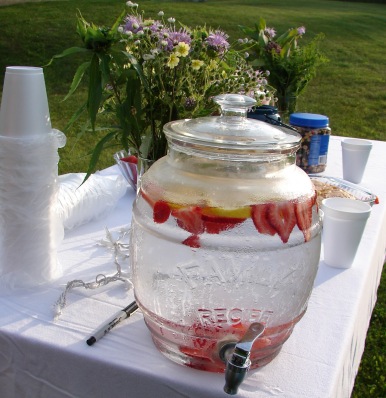 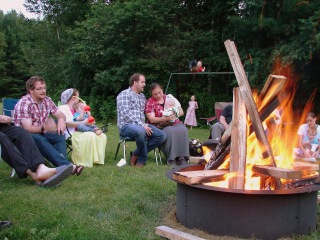 Elv and I have been married for almost thirty-five years. I guess that’s a rather ordinary landmark for couples in our Menno culture. I suppose it is an ordinary place to take stock too, of the health of our relationship. We honestly wouldn’t have done this had it all been easy and breezy for us and our friends. More realistically, marriages are being attacked regularly in all settings and at all ages and stages.
So Elv and I, having our own quota of challenges, have learned a few things, I hope. (Setting us up for another blow, no doubt, just by making these remarks.)
Yet, I will say them.
1. We value commitment higher than compatibility. This is because compatibility changes as quickly as health and events.  When I began to have health issues it effected my personality. So Elv had to learn to adjust, too. Some of the known, usual ways of relating comfortably “went missing”. We had learned each other’s likes and dislikes. Never dreamed of the changes to come. For instance, suddenly, I was NOT okay with getting up at five in the morning to have coffee with him. While I had been the one to push it in the early years. I simply couldn’t get awake anymore after a long night of shallow sleep on and off, on and off. Along with my sleep changes, Elv needed far less sleep than he used to need. This seems like a simple problem, but it has taken us a couple of years to accept these changes … to go back to the commitment  part of our relationship to say, “We are married to each other, we are staying in the marriage, and we are going to let our commitment speak the loudest to help us to reconcile the changes we don’t understand.” Morning coffee was especially important to me because Elv has always worked long hours and evenings are full of chores, and family time, and with other demands. There was not time to really connect intellectually with our hearts and minds. I loved coffee time in the morning with Elv. I still hate it that I have to sleep till seven to stay good with life. But we determined to figure this out. We are finding other ways to make this loss up to ourselves and our marriage.
2. We value commitment higher than perfection.  Because after 35 years we both know neither of us is. But we HAVE each other. When you choose to let go of “perfection”,  it is so much nicer all around. It far more relaxing to accept that he never is going to pick up his socks. Get used to it and learn to enjoy picking them up. They’re just socks and though they might stink; thank God you have someone to pick up after. Besides there are ways he picks up my dirty socks, too, so I can stop worrying about them.
3. I value commitment over emotional support. Actually, what I am about to say might mess up our joy if we let it, but here is a bit of truth that women could figure out sooner with less drama than we have to date. Emotional support is not really part of  your husband’s sacred marriage vows. Let’s say this a different way. Emotional support is a figment of women’s imaginations, because it is thought up by our own fantasy and has little to do with what men are capable of doing in the way we have dreamed up. I’ll wager that what you believe you desire from your man in the way of emotional support is silly and fantastic, directly proportional to your level of supposed frantic need thereof.  Pick a different, more realistic way of feeling cherished, girls, like BEING content.  There are other more attractive ways to get his attentions.
4. He values commitment over conflict. Lately, Elv initiates returning to a tricky conversation we’ve just had, to talk it over a little more to reach a better place. Knowing he is staying in the conversation for a result that we both are good with, has given us a field to operate in, successfully. It’s all the emotional support I need and it is what he can give. It is not only good enough, it’s wonderfully comforting. It is not about bargaining, either. And not about sides. It’s the happy conclusion that we really do want the same things after all: mutual respect and trust. It is so much easier to see the angle a man is trying to put over if he is sweet about it and if she is assured that he likes her to have her angle now and then, too.
Just one more story. There was a prayer request given at prayer meeting lately, for a very old gentleman who was seen sitting at a deli table, alone, eating his lunch. When asked where his wife was, he admitted mournfully that the two of them had been separated for a thirty day stint. His wife had tired of his “abuse” and had called the police on him. Neither of them expected to have to spend the next thirty days separated from the other.
Ok, Elv and I laughed when we heard this request. I’m sure we could have been misunderstood by our laughter, but seriously? It is about time at almost ninety for a married couple to place a premium on the fact that marriage is not a pain, it’s a gift. It’s a place! A valuable institution to not be handled with argument and silence and distance. It’s home. A sense of belonging to be guarded and valued. After what we’ve experienced and watched others walk through, we ought to know this and do it! We pray that said, dear, old couple will have finally figured this out and will make their last few days together good ones.

4 thoughts on “Pictures and Scribblings”